You may have heard of this new craze: bone broth. It's everywhere I turn. In fact, there are even entire shops dedicated to selling this product! While making bone broth is nothing new, the health benefits of bone broth have come to the forefront with the many Paleo-diet followers. It's not just dieters and medical advice, either - celebrities like Gwyneth Paltrow, Kobe Bryant, and Tom Collichio have endorsed bone broth.

While some say that bone broth is becoming an expensive indulgence, others swear by its healing and wellness abilities. This nutrient-dense liquid is full of gelatin, calcium, magnesium, proline, potassium, and antioxidants, and while it's meant to be drunk instead of used for cooking, these claims might mean it's the new "soup of the soul." So, move over chicken soup - it's bone broth's time to shine.

What is Bone Broth?

Is bone broth just a fancy name for beef broth or chicken broth? Sort of, but not really. It's made in the same way (like on the stove or in a slow cooker) but the cooking process is taken a step further. Like making stock, you roast the bones of your choice - beef bones, chicken bones, or turkey bones. Then, you cover your soup bones with water in your large pot and add apple cider vinegar. The vinegar ensures the minerals will be pulled out of the bones and into the broth.

How To Make Bone Broth

Begin with your choice of animal bones. (For instance, if you are making a chicken bone broth recipe, you could use chicken feet, or while chicken carcasses from your local butcher. If making beef bone broth, use a variety of gelatinous bones such as oxtail, short ribs, marrow bones and shank bones). Blanch the bones in boiling water for 15-20 minutes, then move to the oven to roast along with any veggies (anything from carrots and celery stalks to onions) you are planning to add to the broth.

After 30 minutes or an hour, remove the pan from the oven and place in a large stockpot along with aromatics such as peppercorns, bay leaves, and garlic, and bring to a boil. Reduce to low and simmer for a long time. I mean, a very long time. Some people cook their bone broth for 24 hours, so the bone marrow is fully absorbed into the broth and the bones are so depleted of minerals that they're soft enough to snap. When it's finished simmering, strain using a fine-mesh strainer and refrigerate. It's also freezer-friendly, so you can portion it into ice cube trays for ease. You can use it in any traditional foods that require broth or even water to thin consistency.

The Health Benefits of Bone Broth

Now that we know what it is and how you can make it, let's take a look at the reasons so many people are drinking bone broth. Some people drink it as a snack, while others use it as a meal replacement. Either way - people swear that it's the cure for what ails them!

As we age, the collagen in our joints begins to deteriorate. Doctors used to recommend Glucosamine supplements to aid in bone health (especially for those with arthritis), but now people are turning to bone broth instead. How does it work? When the broth simmers, it pulls gelatin out of the bones. This is why your stock sometimes solidifies in the fridge like Jell-O, the bones have provided a naturally occurring gelatin to thicken the liquid.

When you drink the savory broth, your body absorbs all of that gelatin. It strengthens your bones and promotes joint health by providing a cushion-like coating for your joints. This cushion supplements your natural collagen and helps your joints glide without friction. And it's not just for aging bones - athletes like Tom Brady swear by the health benefits of bone broth and its ability to keep his joints healthy.

"Leaky gut syndrome" is the term that refers to the breakdown of the stomach and intestinal linings. This leads to undigestible foods caught in the gut lining which cause toxins and bacterias to "leak" into the bloodstream. Many people believe this digestive system problem is a cause of food intolerance and allergies, and there are a ton of naturally occurring ingredients that can help heal your body.

Bone broth is good for you in so many ways, as it's full of amino acids, like proline, which are the building blocks that aid in preventing inflammation for your digestive tract health and promote the growth of healthy probiotics. In addition to being anti-inflammatory, it's easily digestible by your system and, unlike more complex food sources, its healing properties promote digestive health and gut health as you easily absorb its vitamins and minerals.

In addition to leaky gut, drinking this nourishing broth has been credited for signs of overall improvement in the immune system and the human body at large. People drinking bone broth report they're less likely to contract the common cold or the flu. This is most likely a result of the healing of the gut, as unhealthy guts cause the immune system to release antibodies that attack healthy tissue in an autoimmune-like response.

When the gut is restored, natural immune responses are re-established. Not only that, but bone broth helps with mood, energy levels, and better sleep. Plus, it has vitamin C and electrolytes, which boost the immune system as well. It also contains the amino acid glycine, which helps with relaxation. Chicken bone broth is especially helpful in this way. These all contribute to keeping your body in top-notch shape, which can prevent common ailments.

Collagen is responsible for promoting healthy skin and shiny hair. When your body lacks the appropriate amount of collagen, your body's connective tissue deteriorates and turns into cellulite. All of us who have a little extra around the midline know that cellulite is the enemy!

Many people report weight loss when they start drinking mason jars of bone broth because their level of cellulite is reduced. An increase in collagen intake is also reported to reduce signs of aging, like wrinkles and puffiness around the eyes.

Where To Buy Bone Broth 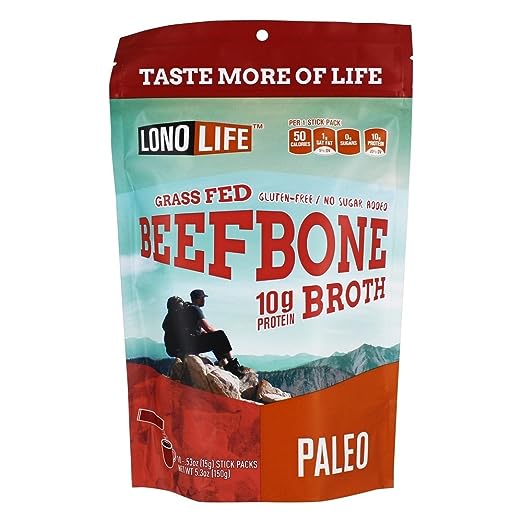 So what if you don't have time to make your own bone broth from scratch? No worries! Companies like LonoLife sell bone broth packets that can be mixed with hot water. Some packs are even created for your Keurig!

At the grocery store, more brands are getting on the trend. Swanson sells three different varieties of sipping chicken bone broth which is sold in handheld containers, making it perfect to drink when you are on the go.