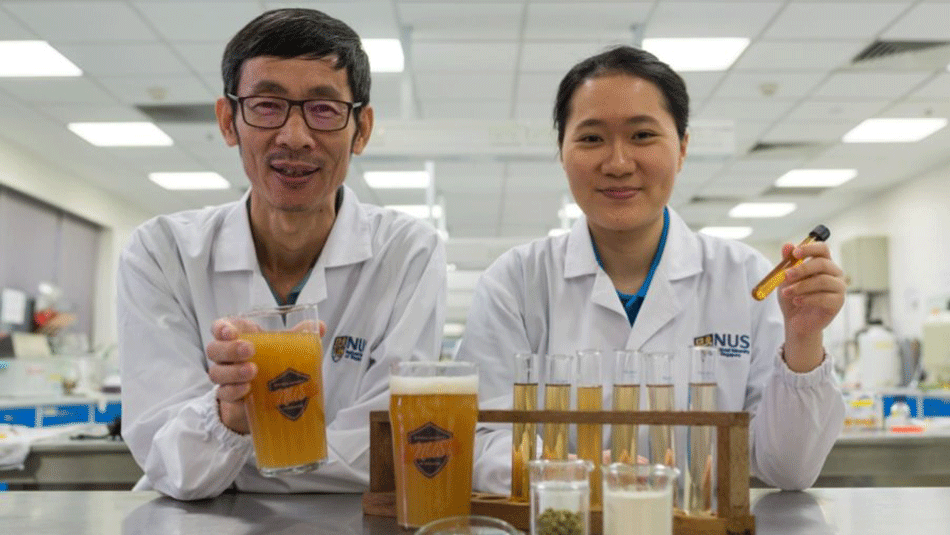 Boosting the health benefits of beer, scientist have found a way to make your favorite suds better for your immunity. The answer?Probiotics. Researchers at the National University of Singapore infused a new beer with probiotics to promote gut health. After propagating probiotics and yeast cultures, and making modifications to the brewing process, researchers developed a final product of a probiotic-filled sour beer using Lactobacillus paracasei L26. This particular probiotic strain is known for detoxing and regulating the immune system.

As Miss Chan Mei Zhi Alcine, a fourth-year student at the National University of Singapore told Science Daily of her project to discover the ideal recipe,

"While good bacteria are often present in food that have been fermented, there are currently no beers in the market that contain probiotics. Developing sufficient counts of live probiotics in beer is a challenging feat as beers contain hop acids that prevent the growth and survival of probiotics.

As a believer of achieving a healthy diet through consuming probiotics, this is a natural choice for me when I picked a topic for my final-year project," s

The lactic acid bacterium used as a probiotic feeds on the sugar in the wort, resulting in a tart 3.5 percent beer. This ABV makes the craft beer sessional enough to drink for the health benefits, while letting consumers go on with the day.

Several friends have been pressuring me (yes, I sometimes succumb to it) to let them sample my #beerbiotic, a gluten free, organic, probiotic fermented beer that Ive have mentioned before. So an impromptu get together at a friends was the perfect time to whip out how the beer would taste on tap. Based on the requests for seconds, #JaredsAmberAle was a hit. Brewed with lots of hops and a bit of raspberries to give it a darker color without grains or malt, it is a perfect complement to the holiday weekend. What makes what I (am trying to) do differently is take a probiotic culture of mine and make a non-sour, non-pasteurized beverage full of probiotics with a kick (make a healthful beer). Can anyone say #taproom of my beers and other gut healthy drinks? Changing the way we view food and drinks is what inspires me everyday. Double tap if you'd come to this new idea of #beveragebar, friends.

While there are already a slew of dairy-based probiotic beverages and food in the market that promote a happy tummy, not many of them are alcoholic. Unity Vibrations and 101 Cider House are a couple that have figured out how to boost up the alcohol content while maintaining a significant level of probiotics.

Kombucha itself has a significant amount of probiotics with trace amounts alcohol - the FDA legal limit is .05 percent. When it comes to specialty beer, however, the probiotics die off in the process. Now you may be thinking, "Wait a minute, what about sour beers?"

For those beer drinkers familiar with sour beers, Lactobacillus is a common bacteria used to make the beer, well, sour. The Lactobacillus consumes the sugar in the wort and turns it into sour-tasting lactic acid.

This provides that tangy, tart flavor we know and love in beers like goses and Berliner weisses. The problem is the probiotics die off during the boiling process. What Alcine has managed to do is keep the probiotics alive to create a probiotic gut-friendly beer.

The International Scientific Association for Probiotics and Prebiotics recommends a "minimum of 1 billion probiotics per serving in order to attain the maximum health benefits." We tend to get these probiotics from foods such as kefir, yogurt, and kombucha. Now thanks to Alcine's nine months of hard work under the supervision of her Associate Professor Liu Shao Quan, we have another reason to enjoy the health benefits of beer.

All that Alcine and Quan need now is a brewery to collaborate with and bring this beer to the public and conventional brewing methods. What could be better than a probiotic sour beer? Nothing really, and beer lovers everywhere would agree.

The Health Benefits of Beer

Thanks to Probiotics, There's Another Reason to Drink Beer