If you were trying to learn English, you would be pretty confused by the use of the word "pepper." I mean, you have hot peppers, bell peppers, sweet peppers, dried peppers, chile pepper, and peppercorns. With so many different types of peppers, how do you know when to use which one?

Well, it starts with knowing the difference between all the various types of peppers. They all have one thing in common: they're used as flavoring agents, but fresh, dried, and powdered peppers all have different qualities. Peppercorns have an entirely different characteristic; they're technically a berry! Knowing what each one tastes like (and how it affects your cooking) will help you understand when to use which one.

Sweet and chile peppers are both fruits from the pepper bush. When they are ground as a spice, they are often called "pepper" in the United States, which can become confusing when compared to peppercorns. The most commonly known sweet peppers are named for their bell-like shape. They have a mild, sweet flavor, and varieties include mild peppers like pimentos (or cherry peppers), European sweet, Cubanelle pepper and sweet banana pepper.

These types of peppers are used best fresh to add sweet or pungent flavors to your cooking. They can be used raw to add crunch to salads or sandwiches. Red peppers are often used cooked in Mediterranean cuisine, and dark green peppers are part of the holy trinity of Creole-style cooking (onion, garlic, green peppers). Chile peppers have a high concentration of the hot oil capsaicin. They vary in their level of spiciness, which is measured in Scoville heat units on the aptly-named Scoville scale. Spicy peppers range in size, shape, and variety, and they come from all over the world (including America, the Caribbean, Thailand, and Mexico).

The most common spicy pepper varieties include peppers with fruity flavors like jalapeño pepper, serrano pepper, poblano pepper, Anaheim pepper, ancho chile pepper, and pasilla. Peppers with a higher heat level include habanero pepper, Tabasco (most commonly known for making hot sauces), Thai chili, and scotch bonnet, and there are superhot peppers like ghost peppers and the Carolina reaper (one of the hottest peppers in the world).

These spicy peppers are often dried and ground into peppers or pepper flakes. When you're chopping this type of pepper, it's best to use protection for your hands. Slick your hands with olive oil before dicing, or wear gloves. These long, slender red peppers are hung to dry until all the moisture is removed, leaving a dark red and crinkly pepper. Finely ground, they should be stored in dark jars with a tight lid. In addition to adding spice to your food, cayenne has been used for health benefits.

Use cayenne pepper in large quantities to add heat to your food (it's a must in many Mexican recipes), or in small quantities to brings out the other flavors from your cooking (like adding a pinch to hummus). Red pepper flakes are dried peppers (usually cayenne peppers) that have been coarsely ground. This allows you to see the difference between the pepper's fleshy flakes and the seeds. These are sometimes sold as a specific pepper, such as ancho chile flakes or chipotle pepper flakes.

Use red pepper flakes to add a bit of spice to pasta dishes or as a pizza topping.

Vibrant, versatile and full of surprising uses! This week in our Facebook Cooking Community group, we heard that Aleppo Pepper is a favourite addition to my muesli with fruit and Greek yoghurt! "So pretty sprinkled over the yoghurt, and it adds a nice little touch of spice." (Thanks Sarah!) ?? Native to Turkey, Aleppo Peppers are highly desirable for their fresh, fruity flavour and mild heat that builds slowly on the palate. Used commonly in Turkish and Middle Eastern recipes, as featured in Ottolenghi?s tomes. A great substitute for crushed red pepper or paprika. ?? Spice Merchant Kirsten from our Canberra store recommends using Aleppo Pepper with dried tarragon and crumbled feta on roasted sweet potato. ?? Do you use Aleppo Pepper at home? #gewurzhaus

This Middle-Eastern pepper has a tangy and spicy flavor. They have a more moderate heat than pepper flakes or cayenne pepper, making them more appropriate if you're trying to bring out fruity flavors in food.

Most often sold pickled, this sweet and mild pepper comes from Italy and Greece. In the U.S., you've probably seen them as Tuscan Peppers or sweet Italian peppers topping salads or served with pizzas.

Waiting, ever so impatiently, for our chile harvest to come! Our plants are still small, but they'll be picking up speed now! #chiles #roastedchile #greenchile #hatchchile #growyourown #vegetablegarden #growingfood #spicegarden #seeds #sandiaseed

Hatch chiles are grown in the Hatch Valley region of New Mexico. Most often, you'll find the long, bright green ones though they can be ripened until bright red. They are amazing when roasted, but you should also try dipping them in a pecan coating and frying them. 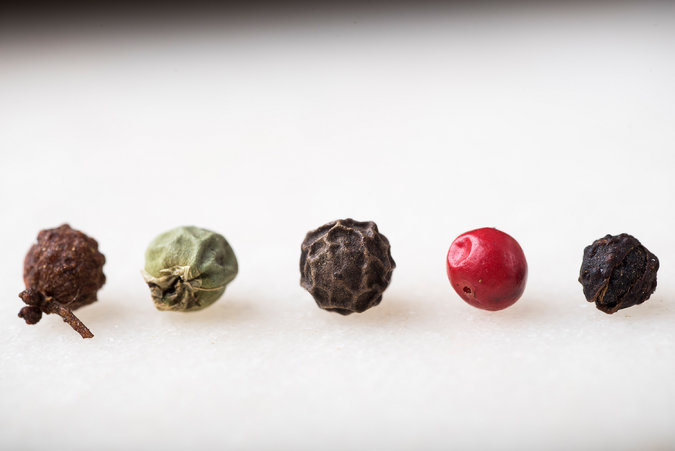 Peppercorns are the world's most traded spice. Black pepper, piper nigrum, was once so powerful it was used as currency. It was also used by the Egyptians as part of the embalming process, and in India it was used as a treatment for everything from the common cold to heart disorders.

The outer shell seals in the flavor. The flavor stays within the peppercorn almost indefinitely, but once ground the flavor will dissipate rapidly. Within 30 days, most of the aroma and flavor of ground peppercorns is lost. Black peppercorns are moderately hot, pungent, and super aromatic. They are the most common variety, but you be surprised to know that they're actually green peppercorns. When the berries ripen from green to yellow, they are picked, boiled, and allowed to dry in the sun (or forced-air heating) until they wrinkle and turn black. After they have been cooked, they're left out to dry, enhancing the peppercorn's strong, pungent flavor.

Black peppercorn varieties include Tellicherry from Southern India (with a sweet, well-rounded flavor), Malabar from India (mildly dark and bitter flavor), Brazilian (harsh), and Lampong from Indonesia (citrusy with a slow burn).

Use black pepper in anything and everything! It is popular used in American style gravy or to top mashed potatoes.

Green peppercorns are super aromatic, with a fresh flavor that lacks the pungency of black pepper. They are the underripe berries, picked just before maturity. They can be air-dried or freeze-dried. When brined or soaked in vinegar,  this type of pepper has a slightly spicy flavor with a fresh, tart aftertaste.

Use green peppercorns to make pickles or to make an amazing steak sauce.

Don't you dare take #pepper for granted! Stop for one second and take a closer look at our White Peppers. If you don't want black flecks in your mashed potatoes or creamy pasta sauces and a milder and less spicy kick, then this is the right pepper for you! ?? https://etsy.me/2yrxi66

White peppercorns have an earthy and creamy flavor that is also spicy and fiery. They're much less pungent than the black variety because these fully mature berries are soaked in water to remove the skins. Their aroma is very distinctive (for some reason it reminds me of socks) so they are not often used as the final seasoning but rather as part of the cooking process.

Red peppercorns are very hot and spicy with fruity notes and little-to-no pungency. These berries are  left on the vine until they turn into a brilliant shade of red. They are more rare than the other peppercorn varieties and are usually seen in blend mixes. They spoil very quickly, so they are often brined, freeze-dried, or air dried. When dried, they do darken so they look like larger-then-normal black peppercorns with a burgundy hue.

Use red peppercorns anywhere you would use black peppercorns. This type of pepper pairs especially well with fish like salmon.

Mushrooms are not the only wild edibles in season at the moment. Just harvested some lovely pink peppercorns. Just rub them between a tea towel to remove the dry outer layer. Such a delicate and fragrant flavour. Will store for ages so you can harvest a lot! #pinkpepper #pinkpeppercorn #wildedibles #wildplants #knowyourfood #nofilterneeded #gleaning ?

A post shared by Healing Autoimmune Naturally (@healing_autoimmune_naturally) on Jul 5, 2020 at 3:15pm PDT

Pink peppercorns are acidic and mild with a hint of sweetness. They have the same peppery bite, but they aren't actually peppercorns at all! The pink "peppercorn" is a berry from a South American shrub.

Use pink peppercorns as a garnish to showcase their brilliant color, or transform them into a meat sauce.

Did you notice that Sichuan food is everywhere nowadays! Who else like this little Sichuan peppercorns that make ur mouth numbing and hot?! They are the soul of Sichuan cuisine. Soeos has the best Sichuan Peppercorns. #soeos #sichuanpeopercorns #szechuanpeppercorns #sichuan #sichuanfood

These aromatic and resinous peppercorn has a moderate heat that tingles your tongue and lingers on your palate. It's another one that's not a true peppercorn. It's actually a berry from the Prickly Ash tree in China. These rust-colored berries are air-dried, and they have little hairs that are actually stems.

Now that you know all about the different types of peppers and peppercorns, it's time to stock the spice rack! Check out the 7 spices you can't live without, and these spice equivalents.

This article was originally published on November 10, 2017.

Watch: The Best Costco Buys to Get the Most Bang for Your Buck