You can't always get what you want, so we're told, but sometimes you might just get what you need. At least if what you need are chicken nuggets that taste exactly like they come from a certain chain but are available simply by opening your freezer.

There's a new kind of Sam's Club chicken nuggets and people are saying it tastes exactly like the real thing from Chick-fil-A. The Member's Mark Southern Style Chicken Bites are 100 percent whole white meat, made from chicken breast with rib meat, fully cooked and lightly breaded. 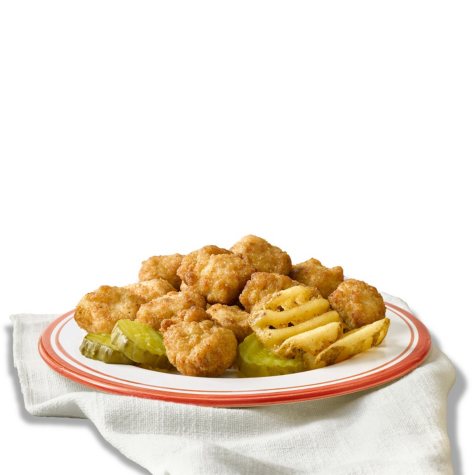 According to the product description, the chicken has just a hint of dill, a taste that is backed up by the reviews on the Sam's Club website. Almost every review on the white meat chicken nuggets raves about the taste, with several customers comparing the Sam's Club chicken nuggets to that of Chick-fil-A and giving a thumbs up to the pickle juice taste.

One reviewer said, "These are sooo good! Never would've thought by tasting them that they came from a frozen bag." Another agreed with the Chick-fil-A nuggets comparison: "Tastes almost identical to a certain chicken fast food that doesn't open on Sunday!"

The nuggets, which are only available at Sam's Club stores, come in a 3-pound bag that sells for $9.98. They can be heated in the oven, microwave, or air fryer (which is the method several reviewers recommend). We suggest trying these nuggets with homemade Chick-fil-A sauces (you might try this one or this one). You could also put some of that sauce on a bun and have your own chicken sandwich, as one reviewer recommended using Hawaiian sweet rolls for the perfect slider.

We'll also note that several of Sam's Club customer reviews say that this is a seasonal product, so if you want to try the Member's Mark chicken nuggets, you might get to your local Sam's Club soon. Get your waffle fries and crispy chicken sandwiches ready. This sauce is the real deal!