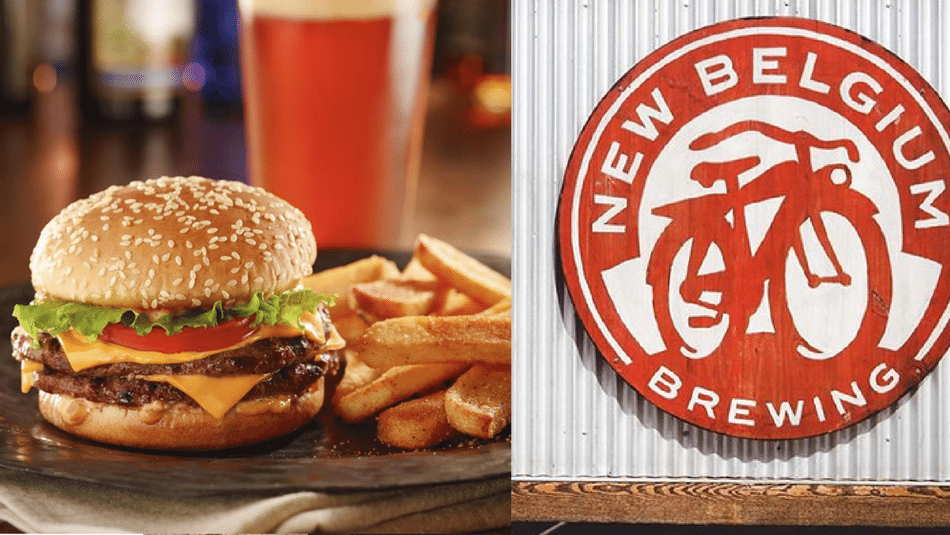 Red Robin Gourmet Burgers and Brews, and New Belgium Brewery are at it again with the announcement of another beer collaboration. In honor of the year they first opened their restaurant doors, the exclusive Red Robin beer will appropriately be called 1969 Lager. While the lager won't be released in restaurants just yet, those attending the Great American Beer Fest this year will get a first hand taste of their new signature lager.

Burgers and brews go hand in hand, and Red Robin is keen on celebrating both parts of it's branded name. Partnering with one of the top craft breweries, this can only mean good things for business. The new New Belgium beer brewed exclusively for the chain is the ideal pairing for their gourmet burgers and bottomless steak fries. The golden lager is crisp, light, and flavorful. Keeping things more even keel, it's geared toward the sessionable side with a 4.7 percent ABV. And with only 18 IBUs, it's a more palate friendly beer to those that can't stand the hops.

Come try the best fermentation across the nation @GABF. We have something special on tap as a 2017 Official Level Sponsor. #YUMMM pic.twitter.com/sInCog2BgR

This new installment is the second beer collaboration between Red Robin and New Belgium. New Belgium produced Red Robin's first-ever beer that was inspired by their mouthwatering Bonzai Burger. The name? Grilled Pineapple Golden Ale. The beer made especially to compliment the pineapple and teriyaki flavors of the Bonzai was also first debuted at GABF last year. Am I sensing a trend?

This isn't the only new collaboration underway this year for Red Robin. The chain has taken to putting beer in the food with their new Red Robin Hop Salt seasoning. The hopped up salt is a new seasoning that was done in part with the Boston Beer Company.

Our admiration for deep-fried spuds is bottomless. #PotatoLoversDay

It uses Hallertau and Tetnager - the same hops in Sam Adams Boston Lager - with a hint of brown sugar and orange to balance bitterness. The new salt will be sprinkled over their signature steak fries and accompanied by a citrus ale dressing - no need for ketchup here. Sounds like your steak fries are about to get a whole lot, dare we say it, hoppier.

For those that can't wait to get a taste of the new collaborations, the 1969 Lager will be available after its debut at GABF, while the hop seasoning will hit restaurants summer 2018. For those of us that couldn't attend GABF, we can at least reap some of the benefits.

Watch: The 6 Best Small Towns for a Beercation