Getting the right Halloween candy to hand out is critical. You don't want to be the house on the block with the least favorite chocolate bar (or heaven forbid, raisins or toothbrushes), and you don't have to be if you know what the most popular Halloween candy is in your state.

According to the National Retail Federation, Americans will spend a total of about $9 billion on Halloween this year, with about $2.6 billion of that amount going for candy. What else do Americans spend their Halloween bucks on? Costumes ($3.2 billion), decorations ($2.7 billion), and greeting cards ($400 million). 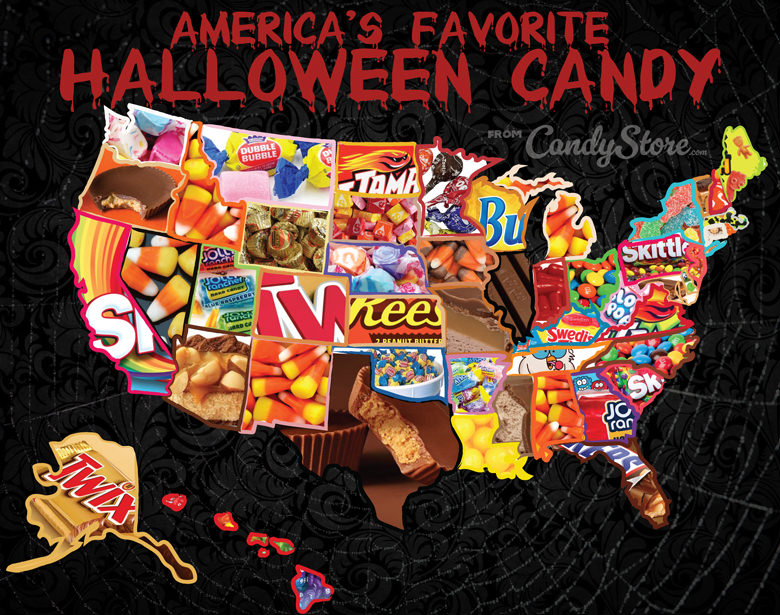 Most of the top 10 shouldn't be a surprise to anyone, even if you feel like arguing about where your personal favorite candy falls on the list. Skittles tops the list, followed by M&M's, Snickers, Reese's Peanut Butter Cups, and Starburst rounding out the top five. Candy corn actually makes the list at #6, with Hot Tamales, Hershey's, Tootsie Pops, and Jolly Ranchers completing the top 10.

There are a few surprising results in the list of most popular Halloween candy in each state. For example, Almond Joy is tops in Connecticut for the third year in a row, but the candy bar only shows up in two other states, Missouri and Texas, both in the third most popular spot. Two popular candies are only popular in one state each: Louisiana was the only state where Lemonheads even made the list (and in the #1 spot), while Delaware is the only state in America that chooses Life Savers as their favorite again.

Sour Patch Kids only show up in the top 3 in five states (New York, Nebraska, Maine, Massachusetts, and Illinois), as does Twix (Alaska, Colorado, Montana, Nebraska, and Rhode Island).

Let's take a look at some of the other state favorites.

California: California goes colorful for Halloween candy, with Skittles, M&M's, and saltwater taffy the state's favorite to hand out for trick or treating.

Arizona: Snickers is the most popular Halloween candy in Arizona, followed by Hot Tamales and Butterfinger, which makes for a fairly well-rounded candy-filled treat bag.

Florida: Snickers took the top spot in Florida this year, moving Skittles down a notch, with Reese's Cups coming in at number three.

Nevada: Yes, candy corn is a love it or hate it candy, but in Nevada, they love it. Hershey's Kisses and Tootsie Pops round out the list.

Pennsylvania: The only reason I can think of why no Hershey's candy made the Pennsylvania top three is that state residents are so used to it, they want to mix it up for Halloween, choosing Skittles, M&M's, and candy corn for their give away favorites.

Hawaii: Taste the rainbow seems like a slogan that fits Hawaii well and their favorite Halloween candy reflects that idea with Skittles at the top of the list, followed by Hershey's Kisses and Butterfinger.

Kansas: Peanuts and chocolate seem to be high on the Kansas list of Halloween flavors, with Reese's Peanut Butter Cups, M&M's, and Snickers in-state top 3.

Arkansas: It appears from their list of most popular Halloween candy, that Arkansans are not huge chocolate fans, at least when it comes to trick or treating.  Jolly Ranchers and Hot Tamales make up the top two candies in the state, with Butterfinger at number three on the list finally giving chocolate treat fans a glimpse of hope.

You can find the complete list of most popular Halloween candy in each state here.