There is a strong tradition in many different parts of the world for using every last bit of an animal for food. We've told you about other traditions like head cheese and chitlins, and how the leftover parts, or offal, can be used to make some excellent food. Mexico has their own set of traditions using offal, with one of the best-known being Menudo.

Menudo is one of those foods that don't have a clear origin story, but we do know that it didn't gain popularity until the 1930s and 40s. According to historians, it's always been working-class food, something cooked for large family gatherings, often around holidays. But why is it so beloved and what exactly is it? Let's take a closer look at Menudo.

What is Mexican Menudo?

Menudo is, basically, tripe soup. Tripe is cow stomach, so yes, this soup is cow stomach stew. But don't let that turn you off. The tripe has a mild, gamey flavor, and when it's combined with other ingredients and cooked for a long time, the beef tripe has an interesting gooey, chewy texture and a perfectly-balanced taste. 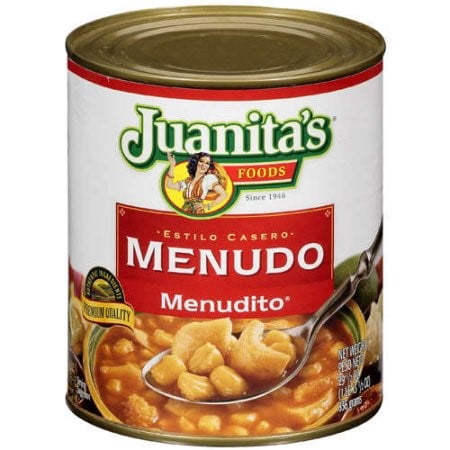 There are different versions of Menudo, popular in different Mexican states. Menudo Rojo uses dried red chilies, while the version cooked in Sinaloa (on the western coast of Mexico) uses no red chile but adds hominy. Around Mexico City, you might find pancita, which is a red Menudo that doesn't use hominy.

Other cooks might add pig's feet, too, to help create a thicker broth.

When do you eat Menudo?

No pos sta *abron la cruda ??Ya estamos listos?? Brong your pots/ollas today, we?ll be fixing hangovers all day 730am-Sellout? Mention someone that owes you some menudo ??

Traditionally, the stew is eaten in the morning or early afternoon, often when the whole family gets together. It's an all-purpose dish for anytime you have a large group of people, including weddings and baptisms, but it's often served as breakfast on the weekends and the day after holidays or celebrations for one reason: Menudo is an excellent hangover cure. The Mexican soup is especially popular on New Year's Day, as the cure for overindulging on New Year's Eve.

How do you make the stew?

First, you need to set aside a block of time. The tripe has to be cleaned very well, by washing it in warm water, scrubbing it with a lime juice and salt mixture, then washing it again. Use honeycomb tripe for this stew.

Once the tripe is clean, you either parboil it or soak it in cold water for about two hours in a large pot. Then you boil the tripe and if using, pigs feet in water with onion, garlic cloves, and spices. You can choose your favorite Mexican spices, but oregano is a must for this dish. Simmer until the tripe is tender, which will take between two and three hours.

While the tripe is simmering, toast the chili peppers then cover them in boiling water, letting them soak for about 30 minutes, or until they are soft. Most Menudo recipes call for guajillo chilis, but you can also use cascabel, Arbol, or ancho chilies.

Drain the chilies, then put them in a blender with three cloves garlic, half a white onion, and ground cumin. Add some broth from the simmering tripe and then blend the mixture until very smooth.

Add the chili mixture to the tripe broth and let the whole thing simmer together for at least 30 minutes. If you're using hominy, add it at this point along with chicken stock and cook until the hominy is done.

Serve the Menudo stew with lime wedges, chopped onion, fresh cilantro, and fresh corn tortillas to soak up the broth.