Have you ever been frustrated at the fact that most instant macaroni and cheese products require you to actually boil the pasta and make the cheese sauce? If you are looking for a faster way to enjoy creamy mac & cheese, then take a look at this canned Heinz macaroni cheese from all the way across the pond.

Heinz in the United Kingdom is far different than what you find in the states. Where the mention of Heinz here in America instantly reminds you of ketchup, hungry eater across the pond will think of something different, including HP sauce and salad cream.

Heinz Canned Macaroni and Cheese is a Thing

We just received some new products here at the shop! A new take on the traditional #heinzbeans you know and love..Curry and Chilli flavored beans and @heinz Macaroni + Cheese! All available at our shop in #kearnynj or on our website for shipping! Link in bio. #currybeans #chillibeanz #heinzmacaronicheese #scottishfood #macncheese

According to the Heinz UK website, their macaroni cheese (not a typo, it's literally called macaroni cheese) is part of their Heinz Pasta Meals which include canned beef ravioli in tomato sauce and spaghetti with sausages. The description is as follows:

the well loved recipe is another of the nation's favourites. Traditionally a favourite dish in Scotland, it is loved by both adults and children alike, and being low in fat and sugar, it's another quick meal that you can add to your list!

At first, I was aghast. "Macaroni and cheese is a true American dish!" About five minutes (and a Google search) later I realized that the recipe for macaroni and cheese was brought to America by Thomas Jefferson and his chef and slave James Hemings. The origins of the dish are European, pointing towards Italy and then making its way up to France.

While it's not Kraft, it does feature a creamy cheese sauce flavored with cheddar cheese. 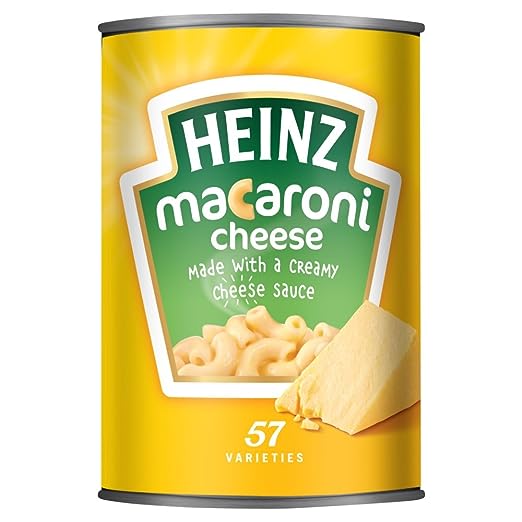 If you are wanting to know how the lads and lasses enjoy their macaroni and cheese, you are in luck. You can pick up a can or two on Amazon without having to convert your dollars to pounds or hop on a plane for eight hours.