Calling Gordon Ramsay famous is an understatement - the man is completely and totally infamous. The celebrity chef is known in almost every corner of the world for the attitude and behavior that once earned him the title of one of London's "most unbearable bosses." He's tenacious, he's angry, he throws plates and name calls. Which really makes you wonder -  what's it like to be one of his four kids?

In an interview with The Telegraph, Ramsay talks about the strict upbringing of his children. It isn't surprising that a man who regularly yells at the contestants on his TV show Hell's Kitchen would raise his children strictly. However, it is surprising to hear Gordon Ramsay talk about the purpose behind it: he believes being strict creates principled children who will be better off in life.

"They don't sit with us in first class. They haven't worked anywhere near hard enough to afford that. ... you appreciate it more when you've grafted for it."

That kind of strict upbringing doesn't demonstrate firm parenting simply for the benefit of appearing harsh.

Before he became a famous TV star, Ramsay was one of five chefs in London to hold Guide Michelin's coveted three-star rating. Since his empire has expanded, he now owns homes in Los Angeles, the London borough of Wandsworth, South London, and Cornwall. He operates businesses throughout the world, has helped fix failing businesses on Kitchen Nightmares, and teaches home cooks with his online Master Class videos.

All of this amasses quite an empire - $54 million dollars according to Forbes. That's as much money as Beyonce makes! So you would think that his children would be pretty set up, right? Not in this family. His children earn their own money, pay for their own bus fare and cell phone bills. Ramsay believes they will be better off in life if they have to earn what they get.

"The earlier you give them that responsibility to save for their own trainers and jeans, the better."

Will His Children Inherit His Fortune? 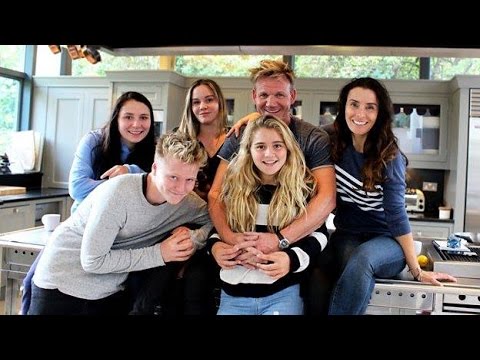 When asked if his fortune will be passed along to his children after he passes, his response is a resounding no. He says it's "definitely not going to them." Not because he wants to be mean, but because he doesn't want to spoil them. He's thankful for the money he's amassed, but he earned every penny of it. Ramsay wants the same for his children.

He will give them a 25 percent deposit on a flat (but assures interviewers it won't be the whole flat). So, I guess he's not totally heartless, after all.

Become the Next Gordon Ramsay and Learn How to Chop an Onion.