The first time I tried a Dilly Bean was only a few months ago. I was enjoying the evening with my family at the Omni Grove Park Inn when hunger arose. We ordered a shrimp cocktail and a vegetable plate and low and behold one of the items on the plate were pickled green beans. I was in shock. These crisp beans tasted of fresh dill and had a snap you could hear throughout the bar. I had to stop myself from eating them all, but it was the beginning of an obsession for me.

What are Dilly Beans?

While they are new to me, Dilly Beans has been a party staple since the 1960s when Time magazine shared that the new snack was taking over the party circuit. "Rarely has the discerning palate been assailed by a less pretentious offering: a raw string bean, pickled in vinegar and dill. Yet the Dilly Bean ... had captured the fancy of cocktail-hour nibblers on the East and West coasts and was rapidly making tycoons out of two ex-schoolmarms who run Manhattan's Park & Hagna Inc." The new snack was the invention of two young New Jersey teachers named Sonya Hagna and Jacquelyn Park who started selling the pickled beans at specialty markets around the area. The beans gained popularity and the two teachers quit their jobs and focused on pickling full time and building an empire. 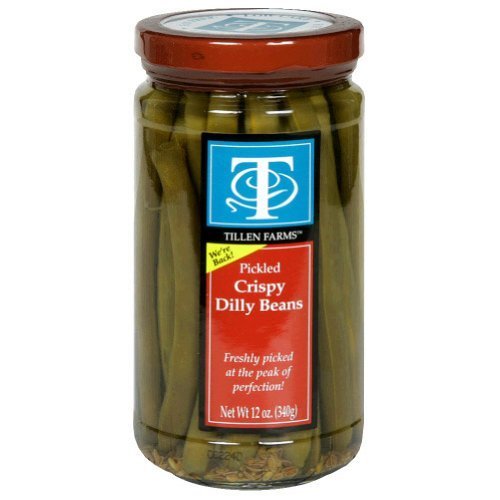 How To Make Dilly Beans

While you can buy them at the store, making your own Dilly Beans with your green bean bounty from the garden is more satisfying. All you need is fresh green beans, garlic cloves, red pepper flakes, yellow mustard seeds, fresh dill sprigs, distilled white vinegar, and either kosher salt or pickling salt. You'll also need to have a few wide-mouth pint jars, a canning funnel, and a small saucepan to make the brine. You won't actually be processing and canning the jars, so there's no need for a large water bath.

Begin by trimming the stem end of the beans and add the spices to the jars. You can be creative and add a kick of cayenne or keep it more traditional by adding in dill heads and dill seeds to the canning jars. Once you've added the spices, pack the beans into the jar by placing the jar on its side and stacking in the beans. A full pound of beans should fit into a quart jar.

Next, making the pickling brine and combine vinegar with water and salt and bring to a boil over high heat. Pour the brine into the jar, leaving a 1/2 inch headspace at the top of the jar. Remove the air bubbles by tapping the jar against the counter a few times and screw on the lid tight. Let the jars cool to room temperature then refrigerate for at least 48 hours before diving into this party side dish. Your Bloody Mary will never be the same.

These beans can be stored for up to 2 months in the fridge.