Costco is a magical place where you can find free samples, big-screen TVs, and the best cheesecake. Costco definitely lives up to its warehouse club distinction with its large quantities and low prices, and the Kirkland Signature cheesecake is no exception. Their standard cheesecake weighs in at a whopping 4.5 pounds, while a standard grocery store cheesecake is only 1 pound.

According to Reddit, Costco desserts have amassed quite a cult following. There are entire threads by Costco members dedicated to discussing which sweet treats are must-buys and their cheesecake is mentioned over and over again.

Probably the most well know Costco bakery dessert is their sheet cakes. I think everyone knew the birthday party was going to be great if you pulled up and saw one of those behemoth cakes covered in massive amounts of frosting. Costco's other cult following desserts include their Belgian mini cream puffs, chocolate cake filled with double chocolate mousse, seasonal pumpkin pie, and gourmet chocolate chip cookies. Most of these go great with ice cream, so this is not a place you want to visit if you're trying to go keto. 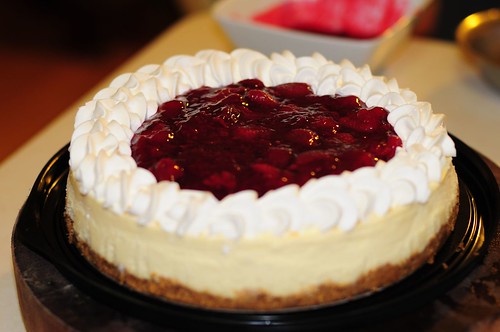 Customers constantly rave about the delish Kirkland Signature New York Style strawberry cheesecake. What makes this cheesecake New York style is the graham cracker crust, as well as cream cheese and sour cream in the filling.

One customer noted that, " ...the filling was light and fluffy, not overly heavy and the strawberry topping...was sweet and delicious, tasting of fresh strawberries in a thick coulis top on this cheesecake."

Some complaints are that the icing on the edge of the cake is too sweet and doesn't balance well with the already sweet cheesecake. This is because Costco uses buttercream icing instead of the more traditional whipped cream icing used occasionally in Italian creme cakes, cupcakes, or tiramisu. In February, Costco released a chocolate heart-shaped cheesecake. This cheesecake is coated with a chocolate fudge ganache, making it extra rich and special for Valentine's Day.

The most anticipated seasonal cheesecake is pumpkin cheesecake, which Costco sells for about 2 weeks in November. This cheesecake has the same crispy graham cracker crust, decadent filling, and a spiced creamy topping. People love serving this alongside Costco's 4-pound apple pie for Thanksgiving dessert. Forget pecan pie. We're adding this to our Instacart next Thanksgiving. Aside from Costco's Kirkland brand of cheesecakes, they also sell Cheesecake Factory cheesecakes. These come in a variety pack with 54 individual bites of caramel, chocolate, and raspberry cheesecake. And while cheesecake certainly isn't low in carbs, one bitesize piece is certainly better for you than one full slice of cheesecake.

The next time you head to your local Costco to shop for a special occasion or a casual Friday night in, don't forget your humble 4 pound cheesecake. If you're looking for gluten free sweet appetizers or desserts, Costco also has those covered with a multitude of different gluten free selections. Sounds like a winning combination to us!