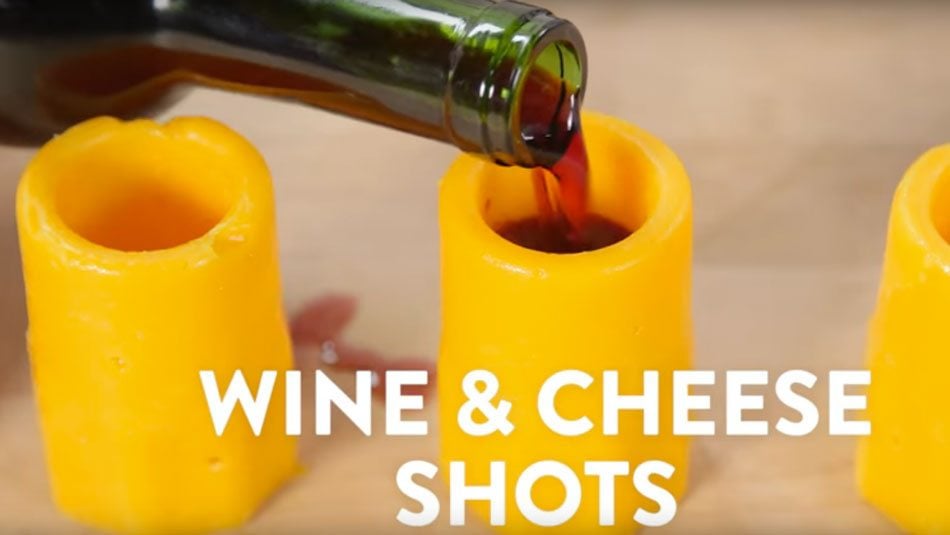 There isn't much that isn't made better by cheese. However, we're calling it - these cheese shot glasses, filled with wine, have officially crossed the line. We admire all of the food publications for their creativity because let's be honest, just about every cheese invention has been created in the age of food videos, but cheese shot glasses are too far. Since Tasty just about broke Facebook feeds across the world almost a year ago, we've seen everything cross our screens from Doritos-crusted chicken fingers to cheeseburger-filled onion rings.

And the creativity behind these recipes is no small feat - some of these recipes are truly works of art and science, blending serious technique with some of our guiltiest pleasures. However, now we're asking, How much is too much?

While you could try to use different cheeses to take shots of different styles of wine, this basically defeats the purpose of the entire concept of a wine and cheese plate. And food in general.

A cheese and wine night is perfect for friends to gather and dish the details of their lives, while nibbling on snacks and enjoying cheese. The shot glass vehicle completely defeats the purpose of a lingering community meal with a sense of love and family. And wine-soaked cheddar cheese? It might not be the best idea.

At a certain point, one has to wonder if these recipes are really delicious and worthy of spending the money to make, or if they're something for us to ogle and be led astray. While we've had many great food discoveries in the last decade or so, we tend to believe that if our grandmothers didn't make it, maybe we shouldn't. Sure, there are times and places for all recipes, but most of these recipes just aren't very practical.

We believe food is something to be enjoyed, savored, and shared with family and friends. We believe in giving you recipes that consistently work and taste delicious. There's no greater disappointment and letdown in life than laboring over a flawed recipe from the start.

These cheese shot glasses are fun, and an inventive idea to be certain. But we have to wonder, have we all let food trends go too far?