Even though I wasn't born in one of the boroughs, I've always considered myself a New Yorker at heart. I have a love of bagels and shmear, I am unapologetic when pushing through people on the sidewalk, and thanks to my mother's tongue, I find myself pronouncing foods like "orange" and "almond" with a different dialect than my peers.

However you pronounce it, one thing is for sure: New York is known for their food. A city built on immigration (My great-grandfather immigrated through Ellis Island from Lithuania as a child), New York City prides itself on its culturally diverse food scene. Thin crust pizza from Italian-Americans, Manhattan clam chowder from Portuguese-Americans, and of course, the delicatessen complete with pastrami, knish, corned beef, bagels, and black and white cookies from Ashkenazi Jews.

Brought over from Europe to the states mainly by Ashkenazi Jews, the deli has become a staple in American cuisine since the mid 19th century. My mother, who grew up in Bayside Queens, shared what an average visit to the delicatessen looked like. "I used to go with my mother to one of our favorite delis. She would pick up pastrami, beef tongue (my dad's favorite) and roast beef. While we waited for our order she would always pick me up a celery soda to enjoy with my sandwich."

I was shocked. Celery soda?

"Yes!" she responded, "We would drink it with our sandwiches. It was always a special treat they had at the deli." This I had to see, er, taste.

Hot strawberry lavender @federaldonuts & a Dr. Brown's cel-ray. I may not be a somm but I nailed this pairing. pic.twitter.com/R44SkOZJnT

Created in 1868 in Brooklyn, New York, A New York doctor (aka Dr.Bown) created the celery soda as a "pure beverage for the nerves" and included celery seed extract giving the tonic a characteristic celery flavor with more pepper and pop than ginger ale. Originally called a celery tonic, the FDA put their foot down and demanded the name be changed to something less "medical". The name was ultimately changed to Dr. Brown's Cel-Ray, and it still stands today as one of the only celery sodas on the market.

Even though it presents itself as a celery soda, don't start imagining a tall glass filled with celery stalks. Known as the "Jewish Champagne," Cel-Ray tastes more like an herbal seltzer. Think of it as very tangy ginger ale.

According to the company's history and an article in the Los Angeles Times from 1986, Dr. Brown's soft drinks could only be found in the city's many Jewish delicatessens, the biggest being Katz, which has been in business since 1888, or sold door-to-door in Jewish neighborhoods.

"Years ago," recalled Gold, "there was a Jewish deli on every corner in the Lower East Side of Manhattan and other neighborhoods. People would come to the delis to eat, to talk, to entertain each other and to drink Dr. Brown's, especially Cel-Ray and cream soda.

Dr. Brown's soda finally branched out from NYC in the late 1980s which is around the same time that Jewish Delis started to decline in popularity.

Where to Find It

Let's thank the lucky stars for the internet and fast shipping. While some stores in your area may carry it, (and I say may because the closest Publix advertised online they sold it. It was a different story after I drove 20 minutes to see that they only carried Dr. Brown's Black Cherry.) I suggest buying the soda online to save time and money. 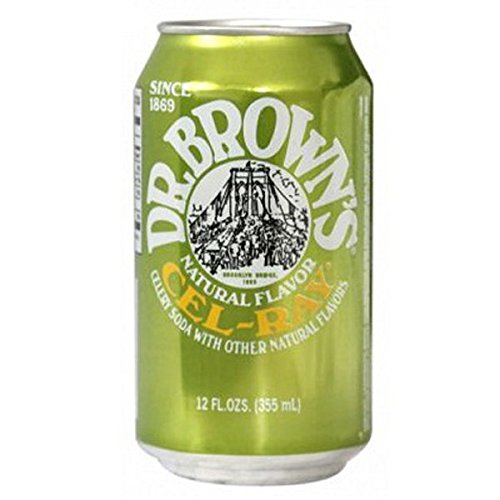 You can also make your own celery soda at home with this recipe from Alton Brown. Simple steep celery seed in simple syrup and combine with club soda.

I personally think the best way to enjoy Cel-Ray is in a tall glass with a large pastrami sandwich on rye.