Known as The King of Rock'n'Roll, Elvis Presley changed the face of music forever with hits like "Jailhouse Rock" and "Hound Dog". A Southern boy at heart from Tupelo, Mississippi, Elvis loved his fair share of Southern-style cuisine just like his momma used to make.

While famous for his hip-shaking and singing, there's one other thing that most people attribute to the King and it's a simple sandwich. Made with peanut butter and bananas and then fried in butter, this banana sandwich was the thing of dreams according to Elvis. 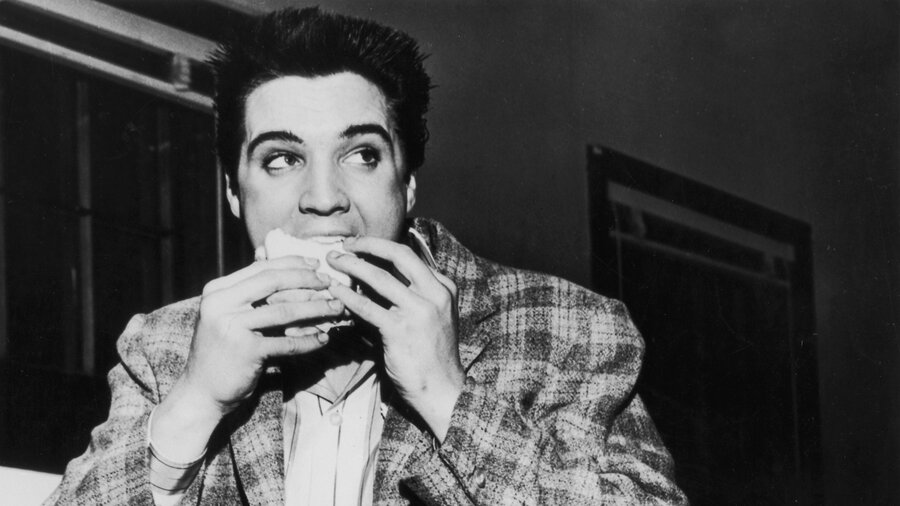 In fact, one night in 1976, Elvis decided to hop on his private jet to Denver, Colorado to take a bite of the Fool's Gold Loaf, a sandwich made with an entire loaf of Italian bread, margarine, a whole jar of peanut butter and jelly and a pound of fried bacon. The sandwich was then deep-fried and served, containing from 8,000 to 42,000 calories with a cost of $49.95 (that's $189 in today's economy).

He was a simple eater. Elvis didn't like to try any new foods with unusual ingredients, but rather loved to stick with Southern favorites. Even his wedding to Pricilla in Las Vegas included a menu with fried chicken, ham and eggs, and of course, a six-tiered wedding cake.

Today, we would like to share with you five of Elvis' favorite dishes that he loved to enjoy. It comes as no surprise that this sandwich is at the top of the list. Made with a ripe banana, white bread, crunchy peanut butter and butter to fry the whole thing up, this sandwich is sure to become a family favorite.

If you really want to feel like the King, add a couple of slices of cooked bacon into the sandwich. The mixture of salty and sweet is a combo you can't help falling in love with. Mary Jenkins Langston, cook of Elvis for 14 years at Graceland in Memphis, Tennessee, made this dish special. Made by mixing together vinegar, lemon juice, red pepper and salt, and then basting the bologna with the mixture, Langston created a one-of-a-kind dish. A Southern snack at its core, fried pickles were always on the table in Elvis' presence. We recommend serving these pickles with a side of ranch or even a spicy hot sauce. According to the biography, Last Train To Memphis, author Peter Guralnick shares that Elvis' mother made him coconut cake quite often as a child.

This coconut cake uses a box mix, making this dessert a snap to put together. We recommend using fresh frozen coconut rather than bagged shredded. The flavor is undoubtably out of this world. According to Google Executive Chef Charlie Ayers, this is the tried and true recipe for fried chicken that Elvis ate. After asking a Waldorf-Astoria coworker who happened to have once worked in Elvis' kitchen, Charlie Ayers was able to finally replicate the recipe for Google's headquarters to eat.

This chicken recipe takes a few days to prepare (and by few I mean five), but it's the real deal. Served golden brown and with a side of honey, this fried chicken requires a little less conversation and a little more eating.